The Horto de Camões Garden (in Portuguese, Jardim-Horto de Camões) is a themed garden dedicated to the life and work of Luís de Camões – the greatest figure in Lusophone literature and author of the epic poem “The Lusiads” (1572), where he recounts the sea voyage of Vasco da Gama to India. Besides gathering more than fifty botanical species mentioned by the poet, this green space is composed of structures alluding to places in Africa and Asia.

Designed by the Portuguese landscape architect Gonçalo Ribeiro Teles and inaugurated in the year 1990 by the Luís de Camões Memory-House Association, the Horto de Camões Garden is located in the small town of Constância, a municipality in the Santarém district about 130 km from the city of Lisbon!

So, do you want to know How To Visit The Horto De Camões Garden In 2023? Keep reading!

As I mentioned in the introduction, the idea of creating a themed garden in honor of Luís Vaz de Camões came from the Luís de Camões Memory-House Association, whose building is also installed in Constância and less than 200 meters from the Horto de Camões Garden.

More than three decades after its opening to the public, the Horto de Camões Garden still assumes itself as “the most original and living monument erected in the world to a poet”. Well, I don’t know if it’s the most original on a planetary level, but the truth is that there are few gardens as creative as this one!

How to Get to the Horto de Camões Garden

Let’s suppose you want to visit the Horto de Camões Garden on a day trip from Lisbon. In that case, you can take the opportunity to discover some towns and cities in the surroundings: Vila Nova da Barquinha (9 km), Abrantes (16 km), Entroncamento (17 km), Torres Novas (20 km), Sardoal (22 km), and Tomar (26 km). And of course, don’t forget to explore the town of Constância itself and the nearby Almourol Castle (6 km)!

In my opinion, the fastest and most practical way to get to Horto de Camões Garden is by car. Nonetheless, if you don’t have that possibility, you can travel by train on the Beira Baixa Line (a historic railway line that connects Entroncamento and Guarda).

First, take the train (Alfa-Pendular, Intercidades, InterRegional, or Regional) at the Lisbon-Santa Apolónia or Lisboa-Oriente stations and get off at Entroncamento. Once at that station, you have to take another train (Regional) and get off at Praia do Ribatejo station (2.5 km on foot).

TIP: This trip has a minimum cost of €9.65, but check all prices, timetables, lines, and services on the official website of CP – Comboios de Portugal.

Although the admission isn’t free (only children up to 9 years old don’t pay for a ticket), the Horto de Camões Garden has a symbolic cost when it comes to ticket prices: 1.50€ (adults) or 1€ (young people from 10 to 17 years old, students, and over 65 years old).

What to See at the Horto de Camões Garden

The Olive Tree & Camonian Route are probably the first two points of interest you’ll see in the Horto de Camões Garden, as they are just a few steps from the reception and ticket office. Now, the Olive Tree (or Olea europaea) is one of the most characteristic trees of the Portuguese landscape. And this one is decorated with two signboards, the bottom one showing an excerpt from an eclogue (that is, a pastoral poem in dialogue) by Luís de Camões.

Immediately behind the tree, you’ll find a table with a tile panel titled “Camonian Route”. Luís de Camões repeated Vasco da Gama’s sea voyage between 1553 and 1554, passing through iconic places such as the Cape of Good Hope (in South Africa), the Island of Mozambique, and Goa (in India). In the following years, he lived between Goa and Macao (in China), where he wrote much of his masterpiece “Os Lusíadas”.

Among the most notable details of the Horto de Camões Garden, it’s impossible not to highlight the dozens of information boards of these same botanical species, which are accompanied by the respective transcriptions of the verses where Luís de Camões includes them!

Promoted by the Cultural Institute of the Government of the Special Administrative Region of Macao (formerly Cultural Institute of Macao), the Garden of Macao is a tribute to Luís de Camões’ extended stay in Macao, the last European colony in Asia. Interestingly, it’s also a continuation of the Botanical Garden, as it brings together species that are very present in Chinese landscapes (such as Indian cane, magnolia, papyrus, or water lily).

In my opinion, the Garden of Macao is the most photogenic place in the Horto de Camões Garden, thanks to its Zen lake, inhabited by countless fish and water lilies; its lake pavilion in shades of red and green, with ceramics from Macao; and its serpentine walls, inspired by the popular “Dragon Dance” (a traditional show in Chinese culture) and whose colorful ceramic piece symbolizes the head of this mythological animal.

The Auditorium & Ptolemy Planetarium is a small open-air amphitheater, where the “calçada portuguesa” (ie, Portuguese pavement) reproduces the geometric model of the solar system, proposed by the Greek scientist Claudius Ptolemy. For this astronomer, the Earth was the center of the Universe and around it, seven wandering stars revolved: the Moon, Mercury, Venus, the Sun, Mars, Jupiter, and Saturn, plus the twelve constellations of the Zodiac.

Active during the 2nd century AD in the Egyptian city of Alexandria, Claudius Ptolemy may have inspired Luís de Camões (more specifically, the stanzas 80 and 81 of Canto X of “The Lusiads”), as defended by some historians. It’s for this reason that this enigmatic structure is part of the Horto de Camões Garden!

Chess, as we know it today, is a board game of Persian and Indian origins, which began to be widely spread in Europe with the Age of Discovery (15th to 17th centuries). Since then, it has become a professional sport for some and a hobby for others and is considered an art and a science too.

In the Horto de Camões Garden, the Chess was created using (again) the Portuguese pavement, to imitate the appearance of the board (square shape, division into eight rows and eight columns, and alternation of two colors between the subdivisions). The game pieces, made on a large scale, invite the youngest to a game of chess!

“The Lovers Island” (in Portuguese, “A Ilha dos Amores”) is, together with “The Adamastor”, one of the most famous mythological episodes of the masterpiece “The Lusiads”.

Throughout the stanzas of Canto IX, Luís de Camões recounts the desire of the goddess Venus to present Portuguese navigators with a trip to a paradise island inhabited by beautiful nymphs, as a reward for the difficulties they went through and the heroic acts they achieved.

This statue was created by the Portuguese sculptor Lagoa Henriques, the author of the Monument to Camões (in Constância too, right at the entrance to the Horto de Camões Garden) and also of the Tomb of Fernando Pessoa (in the Cloister of the Jerónimos Monastery, in the city of Lisbon).

The last point of interest in this guide about the Horto de Camões Garden is the Armilar Sphere, offered by the Faculty of Fine Arts of the University of Lisbon.

Conceived by Portuguese sculptors António Trindade and Alípio Pinto, it’s the largest armillary sphere in the country, weighing 500 kg and measuring about 3 meters in diameter. For that reason, it had to be transported to Constância by a helicopter of the Portuguese Air Force!

The armillary sphere is an astronomical and navigational instrument, representing the cosmos. During his reign, King Manuel I adopted it as a symbol of his maritime, economic, and political power, and it’s still part of the Portuguese Flag. 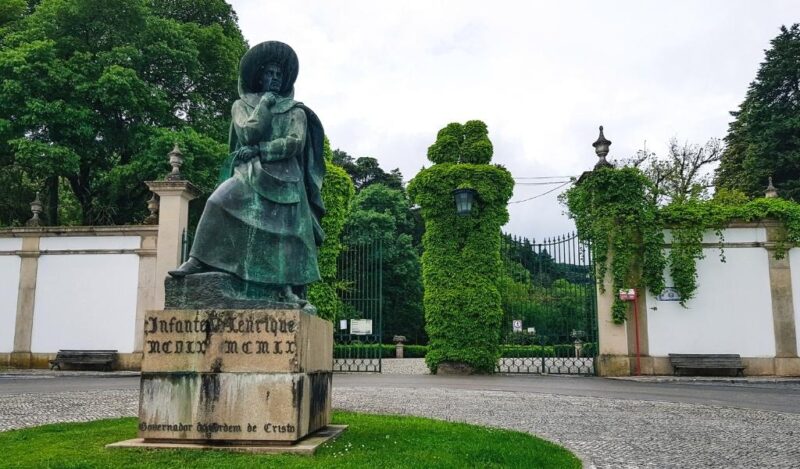 This website uses cookies to improve your experience while you navigate through the website. Out of these, the cookies that are categorized as necessary are stored on your browser as they are essential for the working of basic functionalities of the website. We also use third-party cookies that help us analyze and understand how you use this website. These cookies will be stored in your browser only with your consent. You also have the option to opt-out of these cookies. But opting out of some of these cookies may affect your browsing experience.
Necessary Always Enabled
Necessary cookies are absolutely essential for the website to function properly. These cookies ensure basic functionalities and security features of the website, anonymously.
Functional
Functional cookies help to perform certain functionalities like sharing the content of the website on social media platforms, collect feedbacks, and other third-party features.
Performance
Performance cookies are used to understand and analyze the key performance indexes of the website which helps in delivering a better user experience for the visitors.
Analytics
Analytical cookies are used to understand how visitors interact with the website. These cookies help provide information on metrics the number of visitors, bounce rate, traffic source, etc.
Advertisement
Advertisement cookies are used to provide visitors with relevant ads and marketing campaigns. These cookies track visitors across websites and collect information to provide customized ads.
Others
Other uncategorized cookies are those that are being analyzed and have not been classified into a category as yet.
SAVE & ACCEPT
33 shares
Scroll to Top