The Villa Cardillio (in Portuguese, Vila Cardílio) is an archaeological site located about 5 km from the historic center of Torres Novas. The open-air museum is not very well known by tourists, but as I am fascinated by Ancient Civilizations – especially Egyptian, Greek, and Roman – I couldn’t miss visiting these Roman ruins!

The excavations of Villa Cardillio began in 1962. Since then, foundations, floors, and columns belonging to a Roman country house have been discovered. In addition, archaeologists found dozens of artifacts (ceramics, glass, bronzes, iron, coins, jewelry, etc.), which are on display at the Carlos Reis Municipal Museum!

So, do you want to know more about the Roman Ruins Of Villa Cardillio: Best Tips For Visiting In 2023? Keep reading!

Brief History of the Villa Cardillio

The history of the Roman Ruins of Villa Cardillio dates back to the first half of the 20th century when the archaeological site was explored as a quarry by the locals. These, unaware of the true importance of the Roman villa, used the extracted materials to build their own houses!

However, everything changed in 1962, when Portuguese lieutenant colonel and archaeologist Manuel Afonso do Paço proposed to lead an excavation campaign in the supposed “quarry”. And that is how the Roman Ruins of Villa Cardillio were uncovered, revealing architectural and decorative elements from the 1st-4th centuries AD!

The Villa Cardillio was classified as a National Monument on January 24th, 1967.

How to Get to the Villa Cardillio

Unfortunately, the only way to get to the Villa Cardillio is by car (or by taxi). Therefore, my recommendation is that you visit Torres Novas on a day trip from Lisbon or on a road trip through the Santarém district (or even through the Médio Tejo sub-region).

BOOK YOUR STAY IN TORRES NOVAS

The Roman Ruins of Villa Cardillio are open from Monday to Friday, from 10 am to 12:30 pm and from 1:30 pm to 5 pm. This means that the archaeological site is closed on Saturdays and Sundays, as well as on holidays – even if they fall during the week. Nevertheless, entry is free for everyone!

What to See at the Villa Cardillio

The Entrance to the Villa Cardillio (in Latin, Ostium; and in Greek, Είσοδος or Eísodos) is the most famous section of this archaeological site, because of a mosaic with an inscription in Latin, which gave it its name. Now, “VIVENTES / CARDILIUM / ETAVITAM / FELIXTURRE” has given rise to different interpretations and translations among historians, but they all seem to agree that Cardillio and Avita were the owners of this Roman villa.

The enigma persists in the other words of the inscription, namely if “Happy Tower” is the name of the residence (or town), or if “Felix de Turre” was the artist responsible for creating this mosaic. Other than that, take the opportunity to admire the opus tessellatum flooring of this room, whose colorful tesserae mosaics form geometric patterns, country motifs, and even portraits of Cardillio and Avita!

The Peristyle of the Villa Cardillio (in Latin, Peristylum; and in Greek, Περιστύλιο or Peristýlio) is the central element of the property, around which the remaining rooms were built. As you can see from the photo, there are still some brick columns of this imposing colonnaded gallery, as well as tesserae mosaic panels.

In the Roman Empire, almost all wealthy residences had a peristyle, whether they were urban houses (domus) or country houses (villae). Therefore, the existence of a peristyle in the Villa Cardillio suggests that Cardillio and Avita were patricians – the aristocratic or noble citizens of Ancient Rome.

The Garden of the Villa Cardillio (in Latin, Hortus; and in Greek, Κήπος or Kípos) corresponds to the middle part of the Peristyle, a perfect square measuring 11 meters on each side.

In Ancient Rome, the peristyles of the domus and villae used to surround green spaces, decorated with flower beds, water fountains, and statues of gods or emperors.

In the Villa Cardillio, it’s possible to observe a well approximately 7 meters deep and lined with masonry.

Around this square, a gutter made of opus signinum and 50 centimeters wide which drained rainwater, was also found.

The Hypocaust of the Villa Cardillio (in Latin, Hypocaustum; and in Greek, Υπόκαυστο or Ypókafsto) was installed between the Entrance and the Baths, west of the Peristyle.

This small brick archway housed a furnace, which in turn served to heat the various rooms of the Roman villa – in particular, the Baths’ Caldarium.

The central heating system, totally innovative for that time, consisted of circulating hot air under the floor of the rooms. This effect was achieved by creating empty spaces in the foundations and holes in the walls.

Once again, the Hippocaust was exclusive to wealthy houses and public bathing places.

The Baths of the Villa Cardillio (in Latin, Thermae; and in Greek, θερμός or Thermós) aren’t as easy to distinguish with the naked eye as other rooms already mentioned here. Even so, during the archaeological excavations, traces of a Caldarium and a Frigidarium were found, as well as a swimming pool, two older tanks, and the Hypocaust.

The Exedra of the Villa Cardillio (in Latin, Exedra; and in Greek, Εξέδρα or Exédra) was erected east of the Peristyle, facing the Entrance. The name comes from the semicircular atriums (or porticos) of Ancient Greece, which were normally used for conversations or meetings, and achieved great popularity in Ancient Rome.

Since ancient times, exedras were part of buildings and public spaces – which only reinforces the social status of Cardillio and Avita. Among the best-known examples of modern exedras is the Renaissance exedra of the Cortile del Belvedere (in the Vatican Museums) and the Baroque exedra of the Fontana di Trevi (in the city of Rome).

The Atrium of the Villa Cardillio (in Greek, Αίθριο or Aíthrio) is located in the northeast area of the Roman ruins. Surrounded by brick columns on three of its four sides, this space seems to have belonged to a building prior to Cardillio and Avita – who lived in the Villa Cardillio in the 4th century AD.

Despite being a more modest space than the Peristyle, the Atrium is one of my favorite places in the Villa Cardillio. And why? Because from here you have a better perception of the enormous extension of the property and you can glimpse the different rooms that make it up! 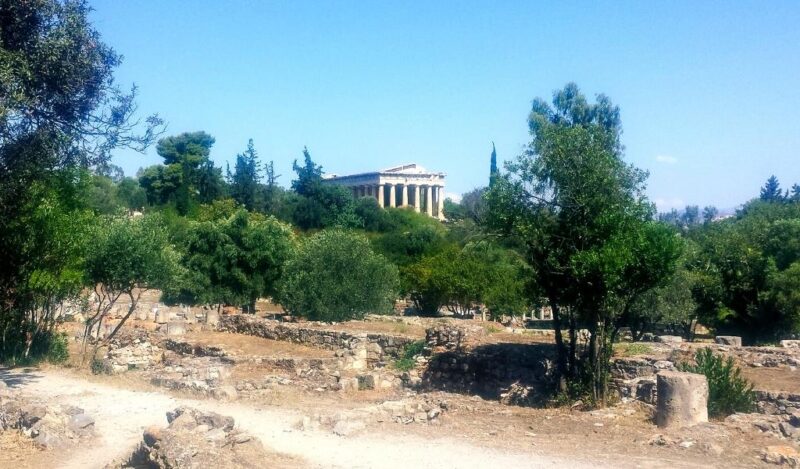 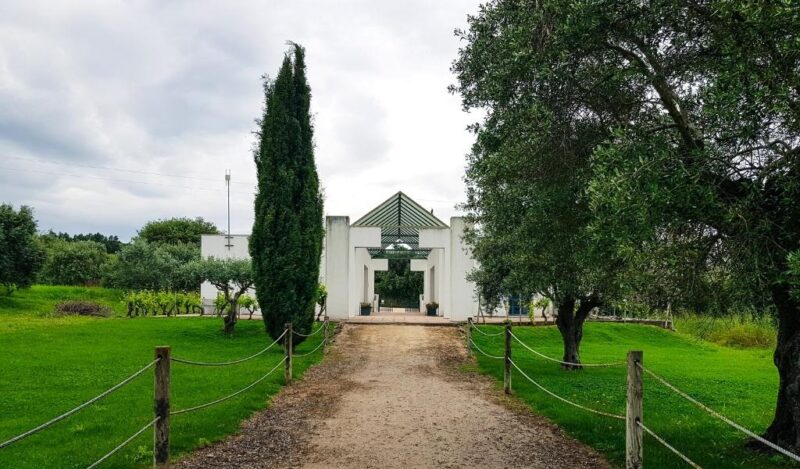