Rising majestically at the end of Main Street, U.S.A., the Sleeping Beauty Castle (in French, Château de la Belle au Bois Dormant) is undoubtedly the central attraction of Disneyland Paris. After all, it’s a fairytale castle, which invokes the imagery of Walt Disney and his Imagineers.

The Sleeping Beauty Castle is not only a gateway to Fantasyland but also the stage for the extraordinary night show “Disney Illuminations”. In addition, it’s easily seen from any point of the main park: Disneyland Park!

So, do you want to know more about the 20 Secrets Of The Sleeping Beauty Castle At Disneyland Paris? Keep reading!

Although there are castles in every Disney resort, the Parisian one is undeniably unique. This is because, while the others were inspired by historic castles from Europe, recreating this at Disneyland Paris would have been redundant.

For this reason, they used a typical castle model from the fairy tales, completely different from all castles in real life. Thus, one emerged based on classic book illustrations, as well as on the animated classic “Sleeping Beauty” (1959).

20 Secrets of the Sleeping Beauty Castle

Since I started visiting Disneyland Paris more often, I discovered a lot of things about the Sleeping Beauty Castle. Some were unusual curiosities, other interesting facts, or even original details, just to exemplify. At the same time, my experience as a Cast Member and especially the months I worked at Fantasyland, were ideal for putting together this list of secrets:

Firstly, something that the Sleeping Beauty Castle has in common with the other Disney castles is that it faces south. In other words, anyone can take pictures at and/or with the castle, without having to worry about the backlight in the pictures! Therefore, the best natural lighting is always guaranteed, at any time of the day.

Next, there is something special about the bright colors of the facade: pink and blue. Did you know that they were meticulously chosen to contrast with the usual gray sky of the French capital? Only you must be asking yourself, “Why pink and blue?” As far as is known, this is an allusion to the discussion between the Three Fairies, because of the color of Aurora‘s dress!

Not only that, but Sleeping Beauty Castle also looks taller than it really is. This effect is achieved because of an architectural technique called forced perspective. Applying an optical illusion, using different scales that depend on the spectators’ point of view, it’s thus possible to manipulate their visual perception.

That is, the object in question will appear larger/smaller or closer/more distant. This strategy was adopted not only in all the castles of Disney parks but also in different locations and buildings, namely on Main Street, U.S.A.!

As you will be able to conclude, Sleeping Beauty Castle and its surroundings are, in short, a great tribute to the homonymous film by Walt Disney. Just to illustrate, the castle has sixteen towers, which symbolize Princess Aurora‘s age when she pricked her finger on the spinning wheel! These towers are adorned with an impressive 24-carat gilt carving, besides their different sizes and shapes.

For example, the two golden towers of the Sleeping Beauty Castle have small dots, which might go unnoticed by most visitors. But after a closer look, you’ll see that these are snails, in a tribute to the French region of Burgundy!

The weather vanes of each of the towers are equally unique. At first glance, you can certainly see flowers, plants, flags, and even two pennants with a “D” from Disney! However, notice the tower on the right: “Is it a hat?” It’s likely the crown of Quasimodo when he was crowned King of Fools in “The Hunchback of Notre Dame”. Although this movie premiered four years after the opening of Disneyland Paris, the decorative element may have been added later!

Likewise, have you ever noticed the trees surrounding the Sleeping Beauty Castle? In their surprisingly irregular shape? They are pruned into a cube shape to recreate the forest scene in the movie Sleeping Beauty!

On the right side of the Castle, there is a well that pays homage to the first Disney Princess: Snow White. Although it does not serve as a wishing well – unlike many fountains in the park – it represents the well in the movie “Snow White and the Seven Dwarfs” (1937).

Inside the Sleeping Beauty Castle, you can visit an attraction on the top floor called Sleeping Beauty Gallery (in French, La Galerie de la Belle au Bois Dormant). Among illustrated books, exquisite tapestries, and colorful stained glass, the gallery reproduces the fairy tale in an immersive, original and creative way!

A stained glass window from the Sleeping Beauty Castle has a magic detail: a double image, which alternates its appearance thanks to light effects! In the first pattern, a rose appears as the symbol of Beauty, the gift offered by Fairy Flora to Princess Aurora, at the beginning of the movie. Alternatively, two doves appear representing Music, the gift from Fairy Fauna.

At the same time, right beneath the magic stained glass, there’s an animated tapestry of Sleeping Beauty herself. If you wait a few seconds in front of this tapestry, you can catch twinkles that occasionally appear on the scene.

On the other side of the Sleeping Beauty Gallery, you’ll find two sleeping guards due to Maleficent‘s curse. However, if you listen carefully, one of them snores and everything! In addition, if you shoot with flash, notice how one of them has pink armor, while the other has a blue one. This is for sure another discreet tribute to the fairies’ argument in the movie!

Right next to the sleeping guards, there’s a raven carved in stone and perched on the top of a huge pedestal. Legend has it that the raven is actually Diablo, Maleficent‘s pet! And if you think that his figure is a mere decoration in the gallery, also try to photograph him with flash and notice what happens!

Despite all the evil plans from Maleficent, Aurora awakens with Philip‘s true love kiss and the two live happily ever after. This bronze statue, which marks the end of the animated film, as well as the attraction, has become a “wishing well” for visitors. So, take the opportunity and make a wish too!

Before you go visit the rest of the Castle, take a moment to admire the stone columns that support the Sleeping Beauty Gallery. The pillars are perfectly camouflaged in trees, giving the feeling of being in an enchanted forest, just like Princess Aurora was!

On the balcony of the Sleeping Beauty Gallery, everyone certainly enjoys the view over Fantasyland. However, few people notice that the walls are decorated with owls. Now, even though there’s an owl that dances with Aurora in the forest scene, I have another theory. In my opinion, these are Archimedes (Merlin‘s owl), who watches over King Arthur‘s legendary sword: the Excalibur!

On the ground floor of the Sleeping Beauty Castle, there’s a shop known as La Boutique du Château. In short, this shop recreates Christmas all year round, with themed decorations, accessories, and toys. Still, The Castle’s Shop is another homage to the movie Sleeping Beauty, especially the forest scene. For example, did you know that the animals that adorn the fireplace seem to look people in the eye, thanks to a light effect used?

Opposite the Christmas shop, there’s a second shop called Merlin l’Enchanteur. Here, everything looks like it will collapse. In fact, one of the arches is supported by nothing less than a tree! Other than that, everything in this shop reproduces the unorganized side of Merlin, where no showcase is the same. Notice how the decorative elements evoke the wizard’s inventions, as well as the ingredients in his potions!

On the underground floor of the Sleeping Beauty Castle, there’s an attraction called La Tanière du Dragon. This can be accessed either from the Merlin l’Enchanteur shop or from the left side of the castle. The Dragon’s Lair is nothing more, nothing less than a dark and disturbing dungeon.

But it also hides the largest Audio-Animatronic from Disneyland Paris, with over 25 meters and 2.5 tonnes! Finally, the Sleeping Beauty Castle is the only Disney castle with its own dragon, making this attraction a unique and unmissable experience! 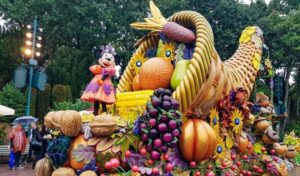 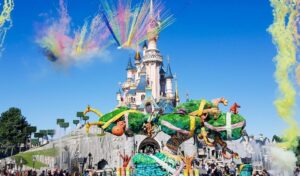 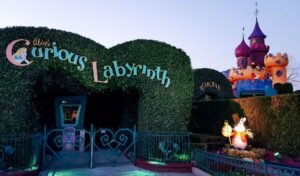 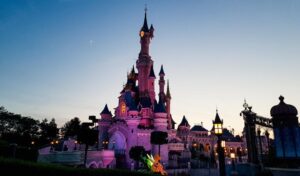 20 Secrets Of The Sleeping Beauty Castle At Disneyland Paris 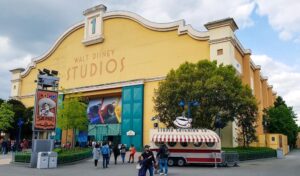 4 Types Of Attractions At Disneyland Paris

This website uses cookies to improve your experience while you navigate through the website. Out of these, the cookies that are categorized as necessary are stored on your browser as they are essential for the working of basic functionalities of the website. We also use third-party cookies that help us analyze and understand how you use this website. These cookies will be stored in your browser only with your consent. You also have the option to opt-out of these cookies. But opting out of some of these cookies may affect your browsing experience.
Necessary Always Enabled
Necessary cookies are absolutely essential for the website to function properly. These cookies ensure basic functionalities and security features of the website, anonymously.
Functional
Functional cookies help to perform certain functionalities like sharing the content of the website on social media platforms, collect feedbacks, and other third-party features.
Performance
Performance cookies are used to understand and analyze the key performance indexes of the website which helps in delivering a better user experience for the visitors.
Analytics
Analytical cookies are used to understand how visitors interact with the website. These cookies help provide information on metrics the number of visitors, bounce rate, traffic source, etc.
Advertisement
Advertisement cookies are used to provide visitors with relevant ads and marketing campaigns. These cookies track visitors across websites and collect information to provide customized ads.
Others
Other uncategorized cookies are those that are being analyzed and have not been classified into a category as yet.
SAVE & ACCEPT
21 shares
Scroll to Top