The Sainte-Chapelle of Paris (known in English as the Holy Chapel) is one of the most beautiful reliquaries in the world. You can find it on the Île de la Cité, an island in the River Seine where the medieval city of Paris was originally founded.⁣
⁣
Constructed in the former Palais de la Cité, in the heart of the French capital, this Gothic chapel was intended to house very important treasures of Christianity, like the Crown of Thorns of Jesus Christ. In fact, it’s estimated that the Holy Relics acquired by King Louis IX cost three times the construction of the chapel!
⁣
Apart from the Sainte-Chapelle of Paris, the only vestige of the Palais de la Cité is the Conciergerie, transformed into the Revolutionary Tribunal in 1793 and known as the prison of Marie Antoinette. The rest of the royal building has been replaced by the Palais de la Justice⁣⁣⁣, the Parisian courthouse.

So, do you want to know How To Visit The Sainte-Chapelle Of Paris In 2023? Keep reading!

Brief History of the Sainte-Chapelle of Paris

One of the purposes of the Sainte-Chapelle of Paris was to serve as the royal chapel of the now-destroyed Palais de la Cité, the former residence of the French monarchs. However, Louis IX was a great devotee and decided to acquire relics befitting the beauty of the temple and the power of his kingdom.

That’s how he bought the Crown of Thorns of Jesus Christ from Baldwin II (the last Latin Emperor of Constantinople), for an absolutely exorbitant amount for the time – it’s estimated that it was about 135 thousand livres, compared to the 45 thousand livres spent in the construction of the chapel!

With the acquisition of this relic of the Passion of Christ and many others (among them, a fragment of the so-called True Cross, the cross where Jesus Christ was crucified), the Sainte-Chapelle became one of the most important shrines in the Christian world.

How to Get to the Sainte-Chapelle of Paris

The Sainte-Chapelle of Paris is one of the main tourist attractions on the Île de la Cité in the French capital. Other points of interest in this historic area include the Pont Neuf, the Place Dauphine, the Conciergerie, the Queen Elizabeth II Flower Market, the Archaeological Crypt of the Île de la Cité, and, of course, the iconic Notre-Dame Cathedral!

With such a central location, it couldn’t be easier to reach the Sainte-Chapelle of Paris. The Cité metro station is less than 300 meters from the chapel and is the station that serves the entire “City Island”. In fact, it’s part of line 4, the most central metro line in Paris, which runs through its historic center.

The Sainte-Chapelle of Paris is open every day from 9 am to 7 pm (April to September) or from 9 am to 5 pm (October to March), with the last entry being 40 minutes before closing. Like most monuments, the temple is closed on January 1st, May 1st, and December 25th.

As for the ticket, it costs €11.5 and can be purchased at the Centre des Monuments Nationaux online ticket office, but entry is free for people under 18 and young people between 18 and 25, residing in the European Union. If you want to visit the Sainte-Chapelle and the Conciergerie, there is a combined ticket for €18.5.

What to See at the Sainte-Chapelle of Paris

The Lower Chapel of the Sainte-Chapelle of Paris was used by the inhabitants of the Royal Palace who weren’t relatives or close friends of Louis IX. Dedicated to the Virgin Mary, it’s a relatively low temple, less than 7 meters high – especially when compared to the Upper Chapel.

The Chapelle Basse‘s ornamentation dates back to a 19th-century restoration campaign. In the 1850s, the sculptor Geoffroy-Dechaume designed the chapel’s portal and much of its decorative elements, which are based on the Fleur-de-lis (the emblem of Louis IX) and the coat of arms of Blanche of Castile (his mother).

The Upper Chapel of the Sainte-Chapelle of Paris is a true work of art in Gothic architecture. The walls, which seem to be made of endless stained glass, form a dazzling and unique spectacle of light and color – although it reminds me a little of the Basilica of the Sagrada Familia in the city of Barcelona!

The famous reliquary that led to the construction of the chapel was on the main altar, in front of a series of stained-glass windows on the Passion of Christ. With the French Revolution, the relics were transferred to Notre Dame, but after the Cathedral fire in 2019, they were kept in the Louvre Museum.

The Chapelle Haute is surrounded by 1113 stained glass windows, which narrate countless biblical scenes, from the creation of the world to the resurrection of Jesus Christ. Many of these stained glasses are the original ones installed in the 13th century, making the temple one of the best models of this type of medieval art in Europe!

A curious fact that not everyone knows is that some of the oldest stained glass windows in the Sainte-Chapelle of Paris are on display at the Musée de Cluny (or Musée national du Moyen Âge, also in the French capital) and at the Victoria and Albert Museum, in London!

This magnificent Rose Window measuring 9 meters in diameter was made at the end of the 15th century, unlike the other stained glass windows – which date back to the 1240s, when the Sainte-Chapelle of Paris was built.

Located on top of the façade of the Upper Chapel, above the main entrance to the temple, it illustrates scenes from the Book of Revelation (written by St. John the Evangelist), over 89 panels in the form of flames.

Rose Windows are one of the most characteristic architectural elements of the Gothic style, but they are usually associated with large cathedrals – making this Rose Window very special!

One of the decorative elements of the Sainte-Chapelle of Paris that suffered the most from the vandal acts of the French Revolution was the sculptural set.

Fortunately, during the restoration work in the 19th century, Geoffroy-Dechaume managed to recreate most of the pieces, using engravings from previous centuries.

Besides the stone panels that adorn both entrances, there are other sculptures inside the temples. For example, the statue of Louis IX in the center of the Chapelle Basse and the group of figures of the Apostles on the walls of the Chapelle Haute stand out. 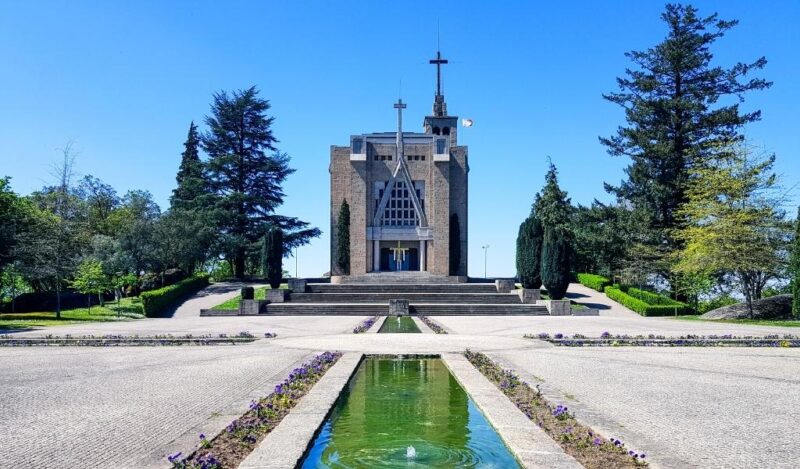