Casa Milà in Barcelona is, without a doubt, the culmination of the work of Antoni Gaudí. The imposing undulating façade suggests the movement of the stone, not to mention the fact that you won’t see a single straight line throughout the residence, as you would expect from a normal city building.

But, La Pedrera isn’t a normal building. Even if you only spend one day in Barcelona, it’s almost impossible not to come across this dreamlike and eccentric place, whose visit of (at least) two or three hours is absolutely unmissable!

So, do you want to know more about Casa Milà In Barcelona: Best Tips For Visiting In 2023? Keep reading!

First of all, to present the history of Casa Milà in Barcelona one needs to know the history of its creator: Antoni Gaudí. Considered one of the greatest geniuses of the architecture of all time, Gaudí became one of the precursors of modern architecture in Catalonia (and in Europe), between the end of the 19th century and the beginning of the 20th century. Still, he created his own style and aesthetics, which set him apart from the rest.

He was born on June 25, 1852, in Reus, in the province of Tarragona, an autonomous community in Catalonia. For Gaudí, architecture was a “total art”, hence the importance and attention he gave to each element and detail of his works. He was also passionate about nature, geometry, and religion and his main clients were the bourgeoisie of Barcelona and the Church.

His last civil work, Casa Milà in Barcelona, looks like a big wave of stone stopped in time, in the middle of the bustling Passeig de Gràcia. Commissioned by wealthy businessman Pere Milà and his wife Roser Segimón, to serve not only as a family residence on the main floor but also to provide extra apartments for rent on the remaining floors, it was built between 1906 and 1912.

It’s a unique work of architecture, as it has a structure consisting of stone pillars, metal beams, and solid brick, that free the main façade from its usual function as a load-bearing wall. At its inauguration, it won the pejorative nickname of La Pedrera among the people and the press, for its rocky external appearance – or because it basically resembles an “open quarry”.

Did you know that Casa Milà in Barcelona was part of Spain’s set of inscriptions on the UNESCO World Heritage List? This 8th session of the World Heritage Committee took place in Buenos Aires (Argentina), between October 29th and November 2nd, 1984.

Four other Spanish sites were announced in the session: Alhambra, Generalife and Albayzín, Granada; the Burgos Cathedral; the Historic Center of Cordoba; and the Monastery and Site of the Escorial in Madrid. However, Casa Milà in Barcelona wasn’t the only work by Antoni Gaudí awarded in this session. Of a total of three works by the architect, there were also the Palau Güell and Park Güell.

Nowadays, Spain is the fourth country in the world and the third country in Europe with the most UNESCO sites, right after Italy and Germany, and tied with France. It has forty-nine heritage assets (both cultural and natural) inscribed on the world list of the United Nations Educational, Scientific, and Cultural Organization!

In the meantime, I’ve already had the opportunity to visit ten of them:

How to Get to Casa Milà in Barcelona

Antoni Gaudí occupied an old manor that extended over two plots of terrain and created a building with a single façade, despite having independent accesses (through Passeig de Gracìa and Provença Street). Each of them had its own central courtyard, although the owners’ main floor covered the entire construction area. In this sense, Gaudí designed the nine floors of the house for different uses:

Casa Milà is located at number 92 of Passeig de Gràcia, one of the most important avenues in Barcelona, which connects the famous Avinguda Diagonal to Plaça de Catalunya. Therefore, it’s very easy to reach La Pedrera, whether on foot, by bus, by subway (lines 3 and 5, Diagonal station), or by suburban train (Renfe, Passeig de Gràcia station or FGC, Provença-La Pedrera station).

The monument is open every day of the year (except on December 25th), from 9 am to 6:30 pm. In addition, Casa Milà in Barcelona has a special schedule for night visits, from 7 pm to 10 pm – although these only take place from Thursday to Sunday and on public holidays.

As for entrances, the basic ticket is called La Pedrera Essential and costs €25 (adults), €19 (students, over 65s, and people with disabilities), or €12.50 (children from 7 to 12 years old). There’s free wifi in all areas and an audio guide is included. On the official website of La Pedrera, you can buy tickets, check out the night, guided or group tours, and confirm all this practical information.

TIP: If you want to save money and visit two UNESCO World Heritage Sites, then I recommend the La Pedrera + Sant Pau Art Nouveau Site ticket! This combo ticket is not only valid for 3 months from the date of purchase, but also costs €30 (adults) or €12 (children aged 7 to 12) – which means that you can visit two monuments for the price of one!

What to See at Casa Milà in Barcelona

There are several details that stand out in the huge façade of La Pedrera. And some of them are the wrought iron railings that complement the balconies, with figurative elements like a mask or a bird. Interestingly, the iron sculptures were created by Josep Maria Jujol (an architect and disciple of Antoni Gaudí), from a model designed and forged by the latter.

More discreet are the reliefs on the stone itself from the columns of the noble floor: there’s one dove, one cross, and even mysterious words in Catalan like “oblida” (“forget”) and “perdona” (“sorry”). At the same time, at the top of the façade, there are inscriptions that make up the Latin phrase “Ave Maria Gratia Plena Dominus Tecum” (“Hail Maria, full of Grace, the Lord is with you”), an “M” for Mary and three lilies, symbols of innocence and St. Joseph.

In Casa Milà in Barcelona, the Catalan architect innovated by grouping small ventilation courtyards into two large ones, facilitating not only the entry of air but also light. These two courtyards are called the Flower Courtyard and the Butterfly Courtyard (in Catalan, Pati de les Flors and Pati de les Papallones, respectively).

The façades of these courtyards are a mixture, both of colors, lights, and shapes, with mural paintings, mythological scenes, and floral motifs, which extend to the ceiling and sidewalls of the main staircase. For example, the entrance hall is wide and resembles an underwater cave, thanks to the light effects on the murals. And the wrought iron doors resemble cobwebs!

Included in the ticket to Casa Milà in Barcelona is a visit to an apartment located on the fourth floor, which belonged to a bourgeois family from the early 20th century. The interior decoration dates back to the original environment, displaying furniture and household items from that time.

On this floor, you can walk around and/or admire numerous bedrooms (including the children’s bedroom, the maid’s bedroom, and the couple’s bedroom), halls (such as the dining room and living room), two bathrooms, the kitchen, the office, and service and storage areas. Even more interesting to note are the many ornamental elements designed by Gaudí himself: knobs, drawer handles, magic eyes, door trims, etc.

The wavy plaster ceilings, along with the windows and doors very wood worked are other details that you won’t want to miss! Especially the hydraulic floor with hexagonal mosaics – that had been designed primarily for Casa Batlló and that was recreated to cover the Passeig de Gràcia sidewalk.

When the former bank Caixa Catalunya bought Casa Milà in Barcelona in the year 1986, it decided to restore it and install an exhibition space in the building’s attic. Therefore, the only permanent exhibition dedicated to the life and work of Antoni Gaudí appears, with models, plans, drawings, photographs, and videos.

It’s called Espai Gaudí and here it stands out, above all, a set of 270 parabolic (or catenary) arches of tabulated brick with different heights. The same type of arches can be seen in other works by Antoni Gaudí, such as the Casa Batlló or the unfinished Church of Colònia Güell.

Last but not least, as happens with its neighbor Casa Batlló (at number 43 of Passeig de Gràcia), Casa Milà‘s roof terrace (in Catalan, Azotea) is the most unusual and indescribable part of the entire building. This rooftop was a one-of-a-kind innovation of its time, due to its sinuous and fanciful shapes, imitating the main façade. And several elements punctuate the roof, such as “badalots” (i.e., stair exits), chimneys, and fans!

It’s incredible to admire the dedication that Gaudí put to each one, incorporating trencadís of ceramics, glass, marble, or stone, with the help of Jujol. In fact, this own decorative technique in the form of a mosaic that comes from the Catalan “trencat” (in English, “broken”) was widely used by both in their conceptions. 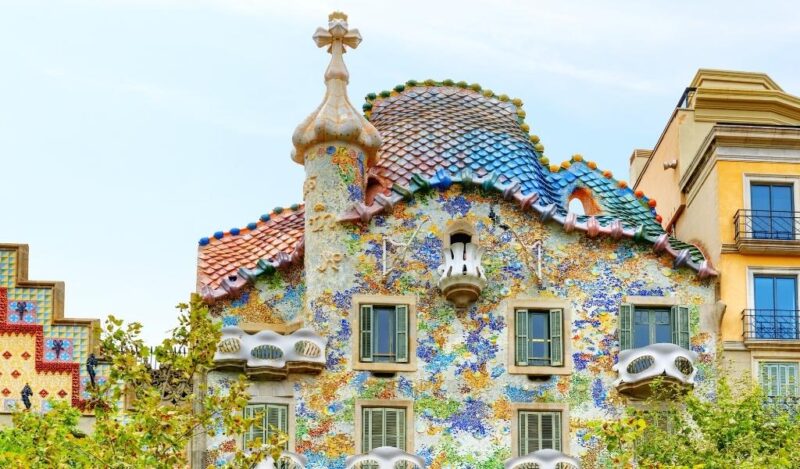 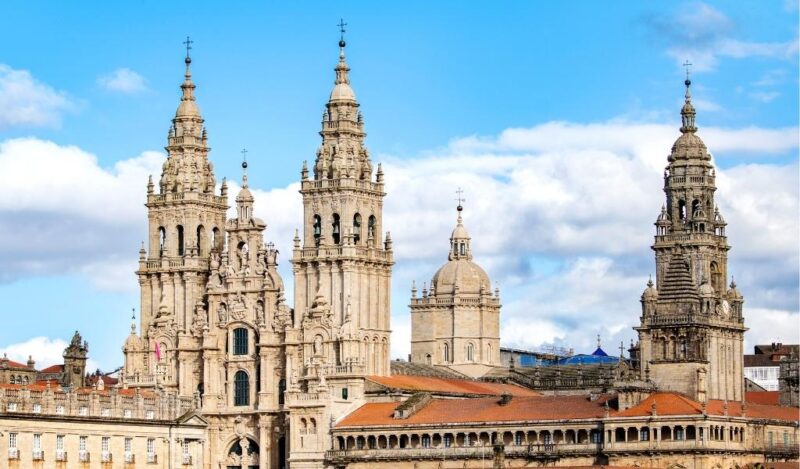 8 thoughts on “Casa Milà In Barcelona: Best Tips For Visiting In 2023”

This website uses cookies to improve your experience while you navigate through the website. Out of these, the cookies that are categorized as necessary are stored on your browser as they are essential for the working of basic functionalities of the website. We also use third-party cookies that help us analyze and understand how you use this website. These cookies will be stored in your browser only with your consent. You also have the option to opt-out of these cookies. But opting out of some of these cookies may affect your browsing experience.
Necessary Always Enabled
Necessary cookies are absolutely essential for the website to function properly. These cookies ensure basic functionalities and security features of the website, anonymously.
Functional
Functional cookies help to perform certain functionalities like sharing the content of the website on social media platforms, collect feedbacks, and other third-party features.
Performance
Performance cookies are used to understand and analyze the key performance indexes of the website which helps in delivering a better user experience for the visitors.
Analytics
Analytical cookies are used to understand how visitors interact with the website. These cookies help provide information on metrics the number of visitors, bounce rate, traffic source, etc.
Advertisement
Advertisement cookies are used to provide visitors with relevant ads and marketing campaigns. These cookies track visitors across websites and collect information to provide customized ads.
Others
Other uncategorized cookies are those that are being analyzed and have not been classified into a category as yet.
SAVE & ACCEPT
41 shares
Scroll to Top