Bologna is the capital of the Emilia-Romagna region, in northern Italy. The city not only has a famous past in terms of gastronomy, music, and other forms of art and culture, but it is also an important university and cosmopolitan center.

In fact, the University of Bologna is the oldest in Europe, having been founded in 1088! Additionally, some illustrious characters from Italian history have studied there, such as Dante Alighieri, Francesco Petrarca, Giovanni Boccaccio, and Nicolaus Copernicus.

Unfortunately, the city is one of the most underestimated in Italy, because of the great tourist centers that are Rome, Florence, and Venice. But, the truth is that Bologna has a lot to offer!

So, do you want to know more about 1 Day In Bologna: The Perfect Bologna Itineraryna? Keep reading!

An important urban center over the centuries, Bologna began to be under the domain of the Etruscans, then the Celts, and then the Romans. In the Middle Ages, it became independent and, eventually, one of the most populous cities in Europe.

From 1506 to 1859, Bologna was part of the Pontifical States, witnessing the emergence of most of its current monuments, that is, palaces, churches, convents, and squares. However, between 1796 and 1815, it was Napoleon Bonaparte who occupied the city, during his First Campaign in Italy.

During World War II, almost half of city buildings were destroyed or damaged by aerial bombardments. Subsequently, in 2000, Bologna was declared the European Capital of Culture and, in 2006, UNESCO City of Music, joined the Creative Cities Network.

DID YOU KNOW? Bologna is mainly known as “La Dotta, la Grassa, la Rossa” (“The Cult, the Fat, the Red”): “Cult”, for having the oldest university in the western world, “Fat” for the rich and delicious gastronomy of the region and “Red” because it uses terracotta, bricks and red tiles in its constructions!

Did you know that The Porticoes of Bologna were part of Italy’s thirtieth set of inscriptions on the UNESCO World Heritage List? This 44th session of the World Heritage Committee took place in Fuzhou (China), between July 16th and 31st, 2021.

Two other Italian sites were announced in the session: Padua’s fourteenth-century fresco cycles; and The Great Spa Towns of Europe.

The city of Bologna is known for its famous gastronomic tours, which take you to taste the delicacies of the region, in addition to its immense porticos, towers, and churches. However, whether you arrive by plane, train, bus, or car, your cultural visit will certainly start in the same place: in the Piazza Maggiore.

BUY EXPERIENCES IN BOLOGNA
BOOK YOUR STAY IN BOLOGNA

First of all, the Piazza Maggiore is the central square of Bologna and it’s surrounded by the most important administrative and religious buildings in the city. Although it was founded in the 12th century, it was only completed three centuries later. Since then, its appearance has remained practically identical to that of the 15th century.

Among the magnificent medieval monuments of the Piazza Maggiore, the following stand out:

The grand Basilica di San Petronio is a landmark of the city of Bologna, with an unfinished facade and dimensions that put it on the list of the largest churches in the world! In Italian Gothic style, the cathedral pays homage to the patron saint and former bishop of Bologna, Saint Petronius.

The basilica began to be built in 1390. Inside, there is a “meridian line” created by the astronomer Giovanni Domenico Cassini: in short, this marking allowed him to make measurements and calculate the timing of certain events, such as the equinox and the solstice!

Before leaving, you can admire the twenty-two side chapels decorated with marble statues, paintings, frescoes, and reliefs with scenes from the Bible. Finally, don’t forget to visit the terrazza to admire the panoramic views!

In the second place, the Palazzo d’Accursio (or Palazzo Comunale) serves as the current city hall of Bologna. It started to function as the home of the Italian jurist Francesco Accursio and, in the 14th century, it was already the municipal seat. Its characteristic clock (at Torre d’Accursio) was added a century later, at the time when the palace underwent a general architectural renovation.

On the entrance’s facade, a rather imposing bronze statue of Pope Gregory XIII stands out, although there is a much smaller one made in terracotta, nicknamed Madonna di Piazza con Bambino (1478), by Nicolò dell’Arca. Meanwhile, the interior of the palace hides several rooms of great historical and political importance, on the top two floors:

If you follow the northwest exit of the Piazza Maggiore, you’ll find the Piazza del Nettuno, named thanks to the monumental fountain that integrates it. The statue of the Roman god became one of the symbols of Bologna and, however, was in renovation work when I visited it…

DID YOU KNOW? The car manufacturer Maserati was founded in Bologna and the brand’s logo is inspired by Neptune’s trident from this same fountain!

The Fontana del Nettuno stands next to the Biblioteca Salaborsa, a public library attached to the Palazzo d’Accursio. Here, it is curious to admire the different architectural styles, as well as the glass floor, revealing the city’s ancient ruins.

On the other hand, if you cross the Piazza Maggiore towards the northeast exit, you will arrive at Piazza Re Enzo, where a 13th-century palace stands out: the Palazzo Re Enzo. This austere-looking medieval monument serves as a venue for events these days.

Surprisingly, the palace inherited the name of Enzo di Sardinia, the illegitimate son of Emperor Frederick II, who was imprisoned here from 1249 until his death in 1272. Even so, its construction dates from 1244, and its original purpose was to serve as a support to the Palazzo del Podestà.

The Quadrilatero is a neighborhood close to the Piazza Maggiore, with a very active mercantile, craft, and commercial activity since the Middle Ages. Here, both restaurants and shops, as well as other small local businesses, multiply through the narrow streets, serving typical products of the Emilia-Romagna. In that sense, you can take the opportunity to shop or start your gastronomic visit from the Mercato di Mezzo, in search of the best food in the region. Buon appetito!

Anyway, it makes your mouth water, doesn’t it? Consequently, I bet you’ll have to burn some calories at the end of this culinary feast! So the good news is that still in the Quadrilatero neighborhood, you have several monuments to visit, such as the Chiesa di Santa Maria della Vita, the Museo Civico Archeologico, the Archiginnasio, and two small towers: the Torre Carrari and the Torre Toschi.

The “Due Torri” are two medieval leaning towers in Bologna, at the same time that they serve as a symbol of the city. Their names Asinelli and Garisenda go back to the two families associated with their buildings, between 1109 and 1119.

The Torre Asinelli served primarily as a prison and small fortress in the 14th century. It was also used by scientists, just like the Basilica di San Petronio: Giovanni Battista Riccioli (in the 17th century) and Giovanni Battista Guglielmini (in the 18th century) studied the planet’s rotation and the notion of free-fall right here.

The Torre Garisenda rises 48 meters from the ground, although it was almost 60 meters high before. Just to illustrate, it was quoted by Dante in the “Divine Comedy” and in his collection of poems “The Rimes”, by Goethe in “A Trip to Italy” (1816-17) and by Charles Dickens in “Pictures from Italy” (1846).

Over 97 meters high, the Torre Asinelli is the tallest medieval leaning tower in the world! These days, it’s possible to climb its 498 steps in order to admire the panoramic views and the red roofs of Bologna. For information, tickets cost €5 and can be purchased in advance on the official website of Due Torri.

Map of the Bologna Itinerary 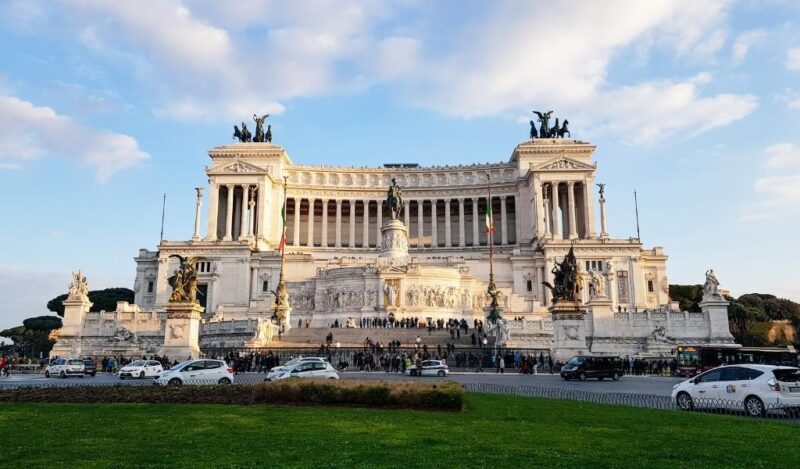 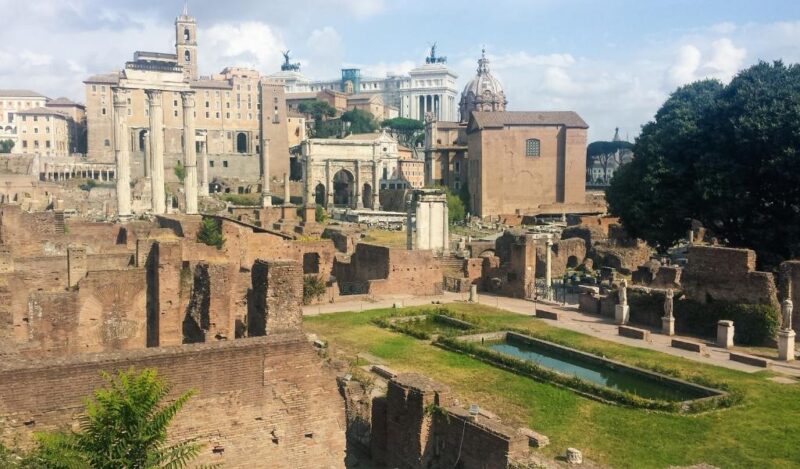 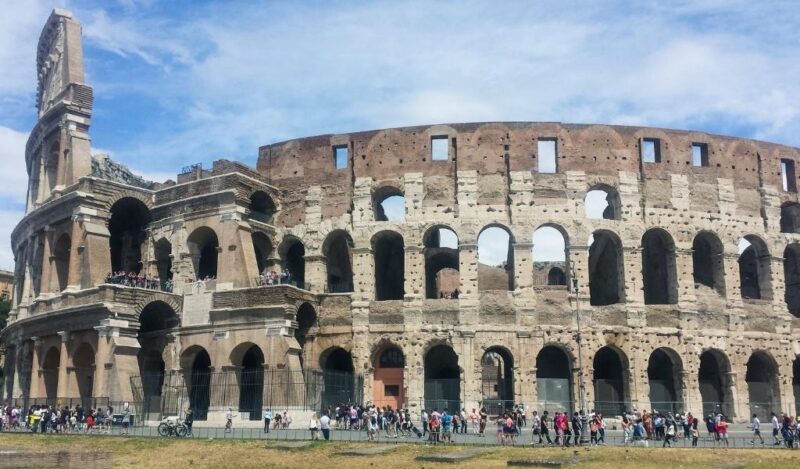